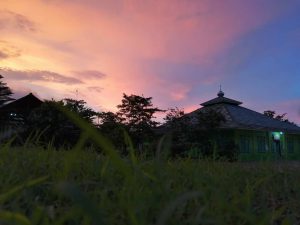 After the inauguration took place, (Alm) Kyai Ahmad Dimyati ordered Ust. Ahmad Yani to look for mentors as well as guardians of the students of Jam’iyyatul Tahfizh al-Qur’an. Very soon after, Ustadz Ahmad Yani found Ustadz Ahmad Rifa’i at the Ummul Qura Islamic Boarding School in ‘Caringin, Maseng. He was selected as boys’ mentor as well as their advisor in July 2002. In connection with the absence of the girls’ preceptors, Ust. Ahmad Yani then looked for another guardian at Nurul Iman Islamic Boarding School, Caringin, and found Usth. Hesti al-Hafizhah who was officially selected as girls’ guardian in Jam’iyyatul Tahfizh al-Qur’an a few days after.

Over time, the interest and determination of the students to memorize al-Qur’an has increased and increased, on the other hand because of the many students graduating from Jam’iyyatul Tahfizh al-Qur’an very well known both as qualified and achieving alumni, then at the end of 2014 Khadimul Ma’had of Modern Institute of Daarul ‘Uluum Lido, Kyai Muhammad Yazid Dimyati, S.Th.I ,. Lc decided to move the students of Jam’iyyatul Tahfizh al-Qur’an to a separate location in a villa nearby pesantren main area. By that time, firstly it was just for female students, then in January the following year was finally followed by the male to nearby venue side by side. These transfer aims to make the students more focused on memorizing the holy Qur’an.

About one and a half years after the establishment, by the 2016-2017 school year, Khadimul Ma’had decided that Pesantren Tahfizh Al-Qur’an Daarul’ Uluum Lido was administratively independent, by separating from its ‘parent’ in teaching and learning process, daily activities, management structures, among many other things.